Russell Investments Group Ltd. cut its holdings in Independent Bank Co. (NASDAQ: IBCP – Get Rating) by 11.5% in Q1, according to its most recent communication with the Securities & Exchange Commission. The institutional investor held 112,467 shares of the financial services provider after selling 14,617 shares during the period. Russell Investments Group Ltd. owned approximately 0.53% of Independent Bank worth $2,471,000 at the end of the most recent quarter.

Independent Bank (NASDAQ:IBCP – Get Rating) last released its quarterly results on Tuesday, July 26. The financial services provider reported EPS of $0.61 for the quarter, beating the consensus estimate of $0.56 by $0.05. Independent Bank posted a net margin of 27.75% and a return on equity of 16.01%. The company posted revenue of $50.69 million for the quarter, compared to $47.75 million expected by analysts. In the same period a year earlier, the company earned earnings per share of $0.56. Sell-side analysts expect Independent Bank Co. to post earnings per share of 2.67 for the current fiscal year.

The company also recently disclosed a quarterly dividend, which will be paid on Tuesday, August 16. Shareholders of record on Friday, August 5 will receive a dividend of $0.22. The ex-date of this dividend is Thursday, August 4. This represents a dividend of $0.88 on an annualized basis and a yield of 4.13%. Independent Bank’s payout ratio is currently 31.88%.

Several analysts have recently weighed in on IBCP shares. DA Davidson reaffirmed a “neutral” rating on Independent Bank shares in a Wednesday July 27 report. StockNews.com upgraded Independent Bank’s shares from a “buy” rating to a “hold” rating in a Thursday, Aug. 4 research note.

Profile of the independent bank 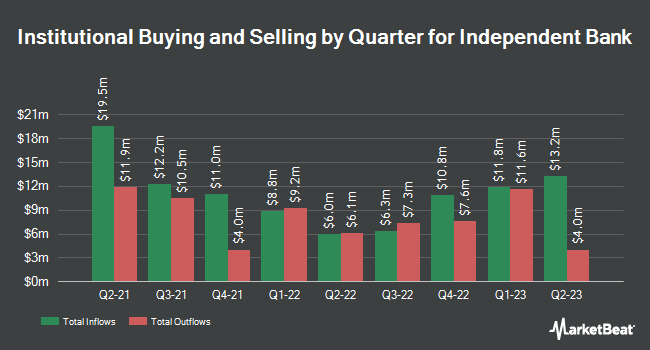